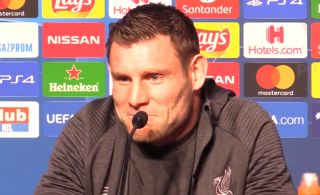 Liverpool star James Milner has responded to Patrice Evra’s huge compliment towards him in typical style.

Watch below as Milner takes Evra’s surprise comments about him being his toughest opponent with a mixture of amusement and modesty, admitting he’s glad to have been a nuisance to the former Manchester United defender.

.@JamesMilner's thoughts on a new @LFC contract – and revelling in being a nuisance to @Evra pic.twitter.com/cdF6MrB2bs

Milner remains a hugely important part of this Liverpool side and many would agree he’s been underrated throughout his career.

Evra clearly thinks highly of the former England international, though, as you can see from his original comments in the Sky Sports studio on Monday night:

The best player @Evra has ever played against?