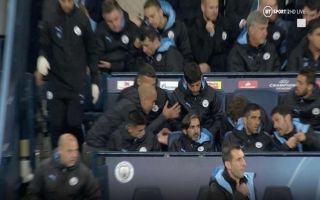 Man City secured a 5-1 win over Atalanta in the Champions League on Tuesday night, but Pep Guardiola appeared to be angered by John Stones on the bench.

The hosts suffered an unwanted injury blow in the first half as Rodri was forced off to add to their defensive woes given he was played in the heart of the backline alongside Fernandinho due to key absences in that department.

In turn, it would have been a huge disappointment for Guardiola to see his summer signing go down with a hamstring injury as he now faces a spell on the sidelines, but he wasn’t too impressed with Stones either.

As seen in the image below, the Spanish tactician was furious as Stones was preparing to come on, leading many to speculate that he wasn’t happy with how long the England international was taking to come on.

Given Rodri stayed down for a while due to the injury, perhaps Guardiola was right to expect Stones to be ready in plenty of time to come on as it wasn’t exactly a surprise that he would have to replace his Man City teammate.

However, a troublesome set of shin pads have seemingly been blamed for the delay, as Stones spoke about the incident after the game.

“I had them [shin pads] on but I just needed to fix them up properly,” the England star told BT Sport, as quoted by The Mirror. “Time is of the essence and that’s what he wanted.”

It’s arguably a fair reaction from Guardiola as there’s no excuse to not be ready to come on if he’s been given a warning that he’ll have to get himself sorted out.

In turn, Stones didn’t sound too upset over the matter, as he probably knows himself that blaming shin pads for his tardiness isn’t going to get a pleasant response.

Pep Guardiola slammed a seat and shouted at John Stones in a moment of rage, as he prepared to replace the injured Rodri in the first-half.