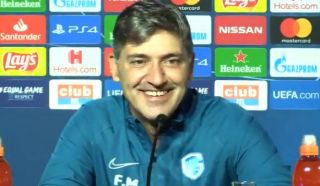 Liverpool fans will love this interview from Genk manager Felice Mazzu as he admits the Reds’ biggest threat is their manager Jurgen Klopp.

When asked about who the danger for his side was, Mazzu could have given a long list of world class players on Liverpool’s books.

But as you can see in the video clip above from the Liverpool Echo, Mazzu smiled and said Klopp’s name first, though he then conceded there are also plenty of pacey forwards in LFC’s attack that his side will have to deal with.

The Belgian tactician also made reference to Liverpool playing a long-ball game for their pacey attackers to latch on to, but we assume given the context that he meant it as a compliment, even though it’s typically used with negative connotations.