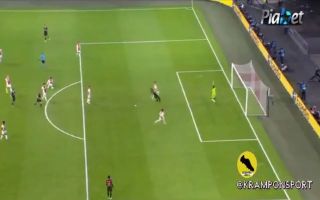 It must be tough being a back up striker and only getting the occasional chance from the bench. It means you won’t get as many chances to score so you have to be absolutely clinical whenever a big chance comes along.

Unfortunately for Michy Batshuayi, he’s produced one of the worst misses of the season against Ajax tonight. It maybe happens quickly, but this is not the way to convince Frank Lampard he should be playing more often:

It certainly hasn’t gone down well with Chelsea fans on Twitter either. It seems most of them have come to the same conclusion after the miss:

Now is there anyone else who STILL wants to make a case for Batshuayi to be our number 1 striker? Sell him to Crystal palace, i seriously dgaf

The Belgian’s future could depend on what happens with Olivier Giroud in January. The Frenchman hasn’t been playing a lot recently and might want to force a move. On this evidence it’s hard to see Lampard being happy to rely on Batshuayi as the second choice to Tammy Abraham.