Nobody is going to deny that Man United have a major issue when it comes to recruitment. We saw the van Gaal era which was a bit scattergun and mainly involved anyone Dutch or who played well at the World Cup, Mourinho signed his trusted henchmen who didn’t really work out.

Even before that David Moyes looked like someone who would be happy if United just signed a few Everton players every window. There does seem to be an obvious strategy under Solskjaer, but it will take a while to undo years of bad recruitment.

The real question is who should be to blame? It probably won’t come as a surprise to anybody that Ed Woodward has made efforts to completely distance himself from the process and tried to absolve himself from any blame.

The Metro picked up some of his comments which were made to the fanzine United We Stand.

Speaking about transfers at the club he said: “The decisions related to recruitment are all taken by football experts. My involvement is signing off the money.”

He went on to explain that the manager and recruitment team all had a veto in the case they felt a player shouldn’t be signed, but was determined to get across the fact that he had nothing to do with the choosing of players.

This all follows a story from The Mirror which stated that Woodward was trying to heal relations with Gary Neville after the former United defender had been consistently vocal in his criticism of Woodward and how he’s overseen a huge decline at the club. 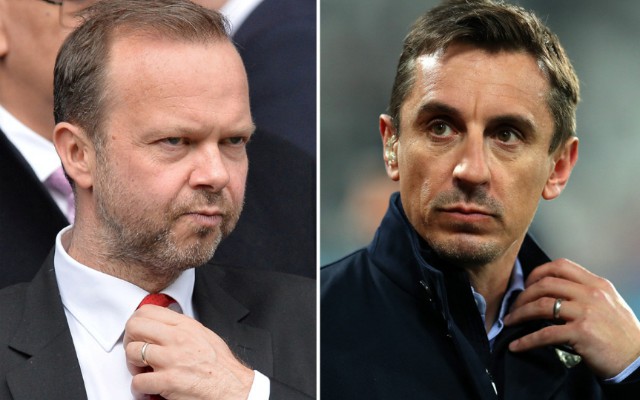 Neville is not a Woodward fan

The problem for Woodward is he isn’t able to simply deny all responsibility and claim it’s not his fault. As a chief at the club it’s his job to oversee these aspects of recruitment. He might not be making the decisions on players, but he employs the people who do.

It’s a brilliantly snakey way of throwing others under the bus because he’s in the firing line. The biggest issue for United fans right now is nobody is surprised, and there’s no obvious sign of things changing either.

Someone in power who won’t take responsibility is a huge problem no matter where you work or what line of business you are in. It just smacks of sheer incompetency, but good luck trying to get Woodward to admit to that.