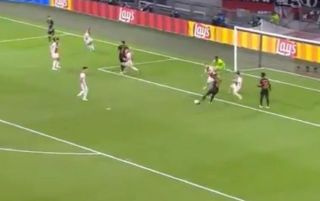 Chelsea left it late but Michy Batshuayi scored what could prove to be a vital goal in their clash with Ajax in Amsterdam on Wednesday night.

The Blues know the importance of their back-to-back meetings with the Dutch giants as it could prove to be decisive in the race to qualify from Group H.

While they host Ajax at Stamford Bridge in a fortnight, they will do so having picked up three crucial points away from home after Batshuayi struck late on.

As seen in the video below, it followed some brilliant work from substitute Christian Pulisic down the left side, and after a stepover from Marcos Alonso, the Belgian international was on hand to hammer the ball home into the back of the net.

Having missed a great chance earlier on, Batshuayi would undoubtedly have been a very relieved man, while Frank Lampard will be delighted with his side’s resolve to find a way to win as Ajax will be left bitterly disappointed to have come out of the encounter empty-handed.

That in turn now makes the reverse fixture all the more important for the reigning Eredivisie champions, who have plenty of quality in their side to cause Chelsea problems away from home.

Great work by Pulisic and Chelsea have grabbed a fantastic result in Amsterdam! ? pic.twitter.com/ZtbTLJrBtr

Video: Chelsea loanee gets a much needed confidence boost after some luck for Belgium vs Ivory Coast
More Stories Christian Pulisic Michy Batshuayi