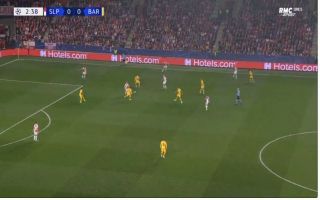 It looked like this could’ve been a tough trip for Barcelona, they’ve been a bit inconsistent this season and Slavia Prague tend to be strong at home.

That was shattered after only two minutes when Lionel Messi showed great anticipation to win the ball back before a quick exchange of passes and a delightful finish put Barca 1-0 up:

That was quick..
Arthur to Messi. Goal pic.twitter.com/xfAu23Ybij

There were some people suggesting Messi had started to decline after a fairly slow start to the season by his standards. He’s been battling injuries so it’s not fair to throw those kind of accusations around. He produced a vital contribution against Inter in the last game, and looks in the mood already tonight.