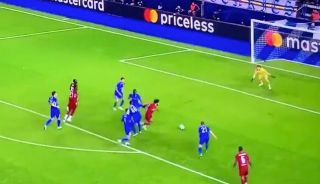 Liverpool were in fine form on Wednesday night as they secured a 4-1 win over Genk in their Champions League encounter.

A brace from Alex Oxlade-Chamberlain set them on their way before Sadio Mane added a third, and Mohamed Salah wasn’t to be denied as he joined in on the act too.

As seen in the video below, the Reds forward did brilliantly to waltz his way through the Genk defence as he received the ball with his back to goal, and he showed great composure and class to add the finishing touch with a a drilled finish into the bottom corner.

It was an excellent goal from the Egyptian international, and although Genk grabbed a consolation goal just minutes later, it wasn’t enough to deny Liverpool as they claimed three vital points to keep themselves in the hunt for top spot in the group.

As seen in the link above though, it’s Oxlade-Chamberlain who arguably takes home the award for the best goal of the night, as he produced a sensational finish from distance to put Liverpool in control for the likes of Mane and Salah to finish the job off.

Salah back doing what he does best. pic.twitter.com/PSNU87YsDE

Salah sending the Genk defenders shopping ? What a goal ? #LFCpic.twitter.com/i1lHXwCCpj

The footwork from Salah! ?

The Egyptian gives the Genk defence the slip as Liverpool run riot in Belgium. pic.twitter.com/YPhl0N17Z4