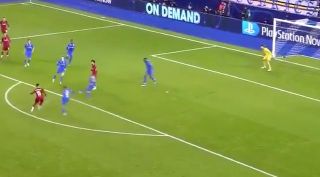 Liverpool ace Alex Oxlade-Chamberlain produced a moment of absolute quality as he doubled their lead at Genk in the Champions League on Wednesday night.

The 26-year-old scored in the first half to put the Reds ahead, but he saved his best for the second period with a delightful finish.

As seen in the video below, it came after some patient build-up play from Liverpool, but as the ball was rolled into his path on the edge of the box, he decided to take the shot first time and produced a stunning chipped, angled effort that flew straight into the back of the net via the crossbar,

It’s an absolutely superb goal from the England international, and it was the bit of world-class play needed to find another breakthrough and potentially put the game to bed.

Given his injury nightmare over the past year or so too, it will be a sweet moment for him to come back and make a big impression in the Champions League, and Jurgen Klopp will hope that helps his side seal all three points and continue their push to advance to the knockout stages this year.

Alex Oxlade-Chamberlain with a NASTY outside of the boot finish after a brilliant pass from Firmino ?#GNKLIV pic.twitter.com/oanDNGEmel

Absolute class from The Ox!! ?

He's got his second of the night and it is truly sublime! pic.twitter.com/nqV2xBGnno