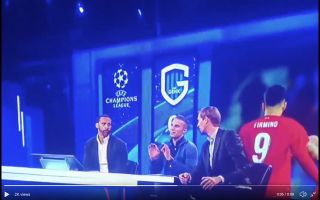 Firmino showed off his trademark Brazilian flair in the 24th minute of the clash by teeing up teammate Sadio Mane with a stunning rabona pass.

Former Manchester United and Arsenal striker Robin van Persie works as a pundit for BT Sport and he couldn’t help but fall in love with Firmino’s stunning pass.

Here’s what the Dutchman had to say:

“The highlight of the backheel pass, that was oooh… so lovely!”

RVP was then cut off by presenter Gary Lineker.

Liverpool fans will be heartbroken as they’ll want to see the world drooling over the Samba star’s magical moment.

Check out the Dutchman’s lovely reaction to Firmino’s pass:

Robin van Persie talking about Firmino is all of us. pic.twitter.com/n08MBvLZcc

It’s clear to see that Liverpool are only at their absolute best when Firmino has the chance to licence to get himself involved in silky pieces of link-up play.

Firmino has performed stunning passes like this countless time already this season. The confidence the forward plays with is unbelievable.

How can you not rate him as one of the top five strikers in the Premier League when he’s capable of things like this.