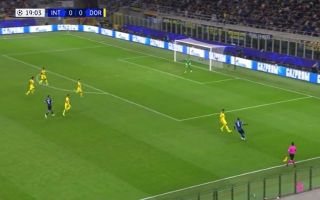 Everything has been going pretty well for Romelu Lukaku since he made the move to Inter Milan. He’s been scoring goals and looked back to his best spearheading the attack for Antonio Conte.

Man United have been dreadful which sparked a lot of criticism for the club for selling him. They are crying out for someone to score goals and he’s been a big loss despite his inconsistent season last year.

There might be some comfort for United fans as he’s just produced this which shows the limitations in his game for all to see:

Only United fans understand how stressful seeing Lukaku on the wing was.

Predictable step overs that would only work if the ball was the size of earth. Then he loses the ball and complains. Lol Inter enjoy! pic.twitter.com/phQtbISFqh

Lukaku trying to dribble from r/soccer

At his best he should be able to power inside onto his left foot and get a shot away. What he actually does is resemble an average 5 a side player tripping over their own feet and giving the ball away.

United probably should have kept him, but this shows one of the main reasons he was available for transfer this Summer.