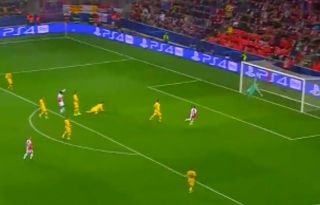 Barcelona took an early lead at Slavia Prague on Wednesday night, but Marc-Andre ter Stegen was a major reason why they were still ahead at half-time.

Lionel Messi struck after just three minutes to put the visitors ahead, and many would undoubtedly have expected the Catalan giants to kick on from that point and go on to secure a comfortable victory.

However, Slavia Prague had other ideas and they forced Ter Stegen into action on multiple occasions as he was called upon to keep Barcelona in the lead.

As seen in the video below though, there was one particular save which stood out above all the rest as he managed to somehow tip over a shot that was seemingly destined for the back of the net.

It’s not the first time that the German shot-stopper has been pivotal for Barcelona, and coach Ernesto Valverde will be hoping that he isn’t needed as much in the second half as he will be desperate to see his side pick up all three points and put themselves in a commanding position to advance from the group.

Huge blow for Barcelona as Koeman rules star out of the Clasico vs Real Madrid through injury October 16, 2020 16:28
Real Madrid CF