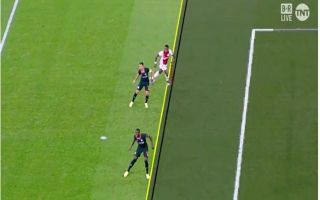 It wouldn’t be another match day without a bit of VAR controversy. Fortunately for Chelsea fans, it’s come to their rescue this time.

Offside should at least be one of those decisions that’s black and white, but this still doesn’t look clear cut. In real time it looks like the player is onside, but VAR intervened with a variety of stills and lines on the screen suggest some shoulder might be offside:

That angle certainly suggests he might be offside, but it shows how fine the margins can be. Chelsea managed to get to half time with the score at 0-0.