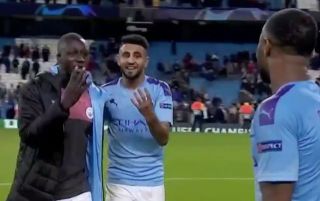 Benjamin Mendy wasn’t letting it go after Man City’s win over Atalanta on Tuesday night, as he continued his trolling of Raheem Sterling.

As seen in the video below, both Mendy and Riyad Mahrez were jokingly raining on Sterling’s parade after he bagged a hat-trick in the 5-1 win, as they insisted that he should have scored a fourth.

Given he did miss a great opportunity to do so, the pair had a point, but Mendy was keen to ensure that his Man City teammate didn’t forget about it even after the game.

As per his tweet below, he was eager to remind Sterling that he should have had four on the night and insisted that he can’t block him in real life, thus suggesting that the trolling may well continue for the England international.

However, the important thing for Man City is that they secured a win and all three points to continue their bid to qualify for the knockout stages of the Champions League.

Sterling has been in sensational form so far this season, and his goals will undoubtedly continue to be key for Pep Guardiola’s side in their efforts to win more major trophies this season.

That’s now 12 goals and four assists in 13 appearances for the 24-year-old, as he looks set to lead City’s charge as he continues to improve his quality and decisiveness in the final third.