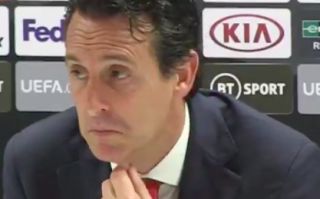 Arsenal manager Unai Emery gave a pretty blunt response to questions over Mesut Ozil’s situation as he was left out of his squad once again.

The Gunners beat Vitoria 3-2 in the Europa League on Thursday night, but in a much-changed team there was still no room for Mesut Ozil, even on the bench.

Emery, however, was not particularly interested in discussing Ozil, as he simply said now was not the time to talk about the German playmaker.

“This is not the time to talk about this. He’s not in the squad and that is the decision,” Emery said.