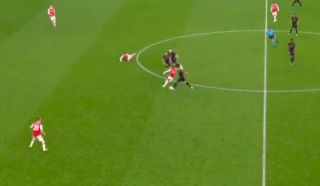 Arsenal ace Ainsley Maitland-Niles made an awful mistake as he lost the ball in a dangerous position to allow Vitoria to stun the Emirates Stadium by taking a surprise 2-1 lead in tonight’s Europa League meeting.

The versatile youngster has generally shone for the Gunners in recent times, but he really messed up here to hand Vitoria a chance to go back in front, which they took.

Watch the video above as Duarte eventually slammed home the rebound to make it 2-1 to the visitors, but there’s no doubt that Maitland-Niles has to take the blame for this.

Arsenal went behind earlier in the game before levelling through Gabriel Martinelli and they’ll have to come back again.