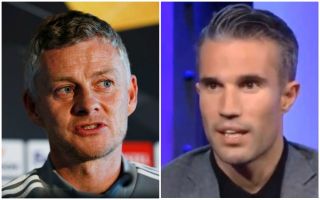 Former Manchester United star Robin van Persie has suggested that Ole Gunnar Solskjaer should not get his side playing out from the back.

The Dutchman was on punditry duty on Thursday night as United beat Partizan Belgrade in the Europa League, but Van Persie seemed unconvinced by their attempts throughout this season to build from the back, as is increasingly common among many top European clubs.

The Red Devils adopted a more defensive and direct approach in their impressive performance to draw with league leaders Liverpool at the weekend, however, and Van Persie believes this approach suits them better.

Many Man Utd fans would probably like to see their team playing more like Liverpool and Man City, but that may just not be realistic for them at the moment with the quality of players they have.

Discussing United’s tactics, Van Persie essentially suggested that Solskjaer should stick to the basics for now, whilst also calling on his old club to give the Norwegian tactician time to build his own team as he continues to work with players signed by predecessors Jose Mourinho, Louis van Gaal and David Moyes.

“They have had a rough start. Everyone can see that they are struggling. Playing out from the back has not been good,” BT Sport pundit Van Persie was quoted by the Manchester Evening News.

“When they can sit back, like against Liverpool, I think it suits them better.

“Did Solskjaer really say that he wants to build from the back? It’s a little bit too unclear for me. If you look at (Jurgen) Klopp and Pep (Guardiola), it’s clear what they want.

“The thing with Solskjaer is it’s not his team. It’s a mix of Moyes, Van Gaal and Mourinho’s. He needs time.”