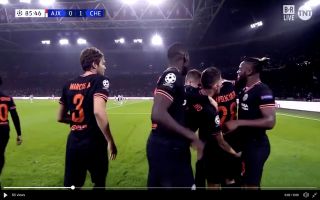 Jorginho raised some eyebrows on Wednesday night after his celebrations with Chelsea teammate Michy Batshuayi in their win over Ajax.

The Belgian forward struck late in Amsterdam to seal three vital points for the Blues, but it was the celebration after which seemingly stole the attention away from his goal.

As seen in the video below, Jorginho was caught giving his teammate a tickle in a private area shall we say, and not one to shy away from making light of a bizarre and funny situation, Batshuayi addressed it head on.

Taking to his own Instagram account firstly, he had a dig at Jorginho with a caption of ‘balls control’ accompanying a video of the incident, while he then also commented on the Italian’s Insta post by asking if he could ‘have his balls back’.

It’s certainly a new way to celebrate a goal, but perhaps there’s a story behind it or it may well just be Jorginho’s favourite new way to congratulate his teammates in the future after scoring key goals.