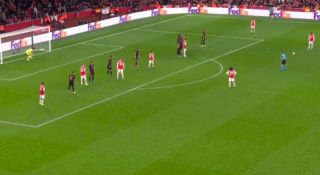 Nicolas Pepe has scored a sublime free-kick not long after coming on as a substitute for Arsenal against Vitoria.

The Ivory Coast international stepped up to curl home this delightful effort from long range to make it 2-2 on the night at the Emirates Stadium.

Pepe still hasn’t scored from open play since joining Arsenal, with this only his second goal for the club, following a penalty against Aston Villa.

However, there can be no denying this is a world class strike and finally shows Gunners fans why their club paid quite so much for him this summer.