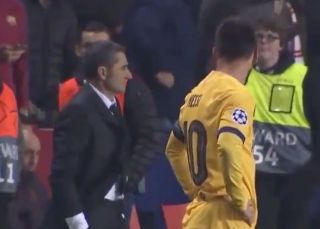 Barcelona secured a 2-1 win over Slavia Prague in the Champions League on Wednesday night, but it wasn’t an entirely convincing performance.

In fact, the Catalan giants have struggled to convince throughout the campaign thus far as although they moved to the top of the La Liga table last weekend and sit top of their Champions League group, question marks continue to be raised over their displays.

One one hand, it could be argued that results are simply the most important thing and perhaps they’ll click into gear as the season goes on.

However, such are the standards and expectations at the Nou Camp, the manner in which they achieve their results is equally as important as the results themselves.

In turn, many would have been left disappointed with what they saw in midweek and it appears as though Lionel Messi may have been looking for coach Ernesto Valverde to change things.

As seen in the video below, the Barcelona talisman was seen staring in his coach’s direction for around a minute after Slavia Prague bagged their equaliser, at which point it looked as though the Catalan giants were in serious danger of dropping points.

Fortunately for them, they forced an own goal not long after to retake the lead and eventually went on to secure all three points.

However, had it not been for Marc-Andre ter Stegen, it could have been a very different scoreline and outcome.

As seen in the comments below though, many Barcelona fans were reacting to the footage of Messi appearing to be staring in Valverde’s direction after the Slavia goal, and they had their say on the situation as it perhaps raises question marks over whether Messi was looking for the Barcelona boss to offer some encouragement or to tweak things tactically to give them back the advantage.

It seems as though nothing was forthcoming, and that in turn led to a critical reaction from most fans towards Valverde.

Messi stares at Valverde, who hasn't changed anything despite Slavia's pressing and domination.

Scared to look at Messi*

Lmao Valverde was shivering by that messi look

Should have stared at Luis Suarez imo

Forget about coaching he cant even look messi in the eyes, so you can imagine how afraid he is of suarez and more outspoken clowns like pique. They youngsters are all victims of his cowardly nature

And that coward couldn’t look him in the eyes, forget talking about tactics

Messi can stare at him for 90mins if he wants but what’s the point if he’s going to publicly back Valverde.

Media can try all they want, VV is here to stay. Not a single soul inside the club is against VV and there has to be a reason for that.

And all Valverde do is being quiet & rubbing his nose. As expected #ValverdeOut

He is the reason !!
MESSI knows that they cannot get rid of him !! This look of agony

Video: Messi finishes Juventus off from the penalty spot after great play from Ansu Fati to draw the foul

Video: Ousmane Dembele scores from distance for Barcelona vs Juventus after a sublime switch for Messi

Video: Messi finishes Juventus off from the penalty spot after great play from Ansu Fati to draw the foul October 28, 2020 21:55
Champions League