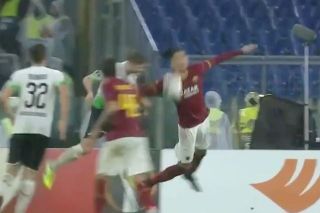 Man Utd loanee and Roma ace Chris Smalling was on the wrong end of a terrible decision as the Italian giants dropped points against Monchengladbach in the Europa League.

The 29-year-old joined the Giallorossi on a season-long loan deal this past summer, and will hope to either earn a permanent move or another shot at United when he returns.

SEE MORE: Manchester United loanee reveals the main difference he’s found since leaving and why it suits his game

With that in mind, he’ll be desperate to make a positive impression as this season goes on, but unfortunately for him he was adjudged to have been guilty of a handball in the 94th minute against Monchengladbach, who went on to score from the penalty spot and secure a share of the spoils.

However, as seen in the video below, the decision was a ridiculous one as replays clearly showed that the ball hit him in the face and was nowhere near his hands.

With no VAR at the official’s disposal, the initial decision stood and it rightly left Roma raging as they dropped two potentially crucial points to a non-existent penalty call with Smalling the unfortunate man in all of this.

He gives away a penalty in the 94th minute ?

AFTER the ball strikes him in the face ????

Details of the final bid that Man United will receive from Roma for Chris Smalling September 29, 2020 18:34
Manchester United FC