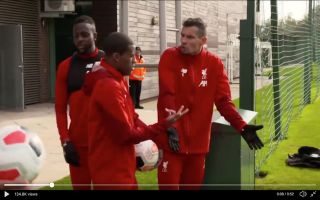 One Liverpool fan described defender Dejan Lovren as the side’s ‘training hero’, another loved how ‘competitive’ the Croatian was when facing his teammates.

Dejan Lovren became a little angry with his Liverpool teammates after they teased him during a ‘one bounce and into the net corner challenge’ during training.

Wijnaldum, Van Dijk and Origi all picked on the Croatian after an attempt that looked like it may have bounced twice before hitting the back of the net.

Lovren wasn’t taking any stick from his teammates and stepped up to convert another corner, leaving his pals silenced.

With Lovren delivering two balls into the back of the net, perhaps Klopp should stick him on corners in the future?

Take a look at Liverpool’s stars having some fun on the training pitch:

Lovren ain’t having none of it

Get Dejan on corners

Can’t believe Lovren made it twice while Virgil failed ??
Gini what did you do. Virgil was quoted saying that after missing.

Lovren is the training hero ?

God, I love this team. What a group. Also, look at that skill from all of them.

It’s no wonder Liverpool are performing so well right now, just look at the team spirit in the squad.

Jurgen Klopp’s men don’t look like they can be beat currently, the Reds are prime contenders to life the Premier League and Champions League this season.