Arsenal midfielder Mesut Ozil would be open to moving to the MLS if he is forced to leave Emirates Stadium in the near future.

Ozil has endured a frustrating start to the 2019-20 campaign, slipping behind the likes of Dani Ceballos, Joe Willock and Bukayo Saka in the squad pecking order.

Unai Emery has opted to give the younger members of his squad the chance to shine in midfield, with Ozil restricted to just two appearances across all competitions to date.

The German playmaker was left out of Arsenal’s matchday squad once again for a 3-2 home win over Vitoria Guimares in the Europa League on Thursday, with Emery refusing to explain his selection decision post-match.

According to Bleacher Report, Ozil is willing to consider a surprise next destination if his situation under Emery does not improve, amid rumoured interest from clubs in the United States. 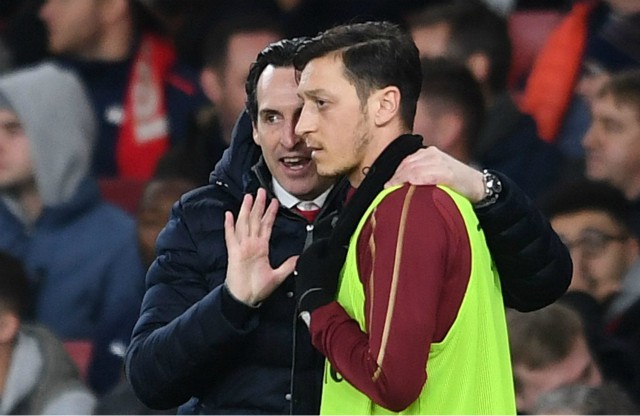 Ozil is not seeing regular playing time at Arsenal under Emery

The report states that the 31-year-old could accept a new challenge in the MLS when he leaves Arsenal, but at the moment, he is content to be patient in an attempt to outlast Emery at the Emirates.

The Spanish boss has faced plenty of criticism for his tactics in recent weeks, with some fans and experts predicting that he won’t be in charge beyond the end of the current campaign.

Bleacher Report states that Ozil’s £350,000 per week wage packet is unlikely to be matched anywhere else and he enjoys his life in north London, but he might have to consider a move away if Emery continues to oversee squad preparations for the foreseeable future.

The former Real Madrid superstar still has plenty to offer at the highest level if he is playing week in week out, with few players in European football that boast his exceptional passing range and technical ability.

Ozil would surely thrive in the MLS and continue to earn a lucrative living in the process, but he could still have a future at Arsenal under a different manager if Emery continues to struggle at the helm.