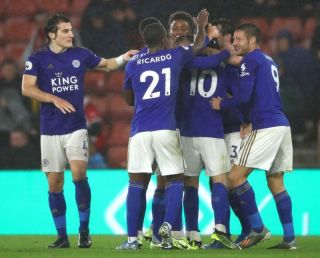 Leicester City made Premier League history on Friday night in their brutally one-sided 9-0 win over a hapless Southampton side.

The Foxes ran riot from the beginning as they scored at a relentless pace before the hour mark, and eventually Jamie Vardy bagged the ninth in injury time from the penalty spot.

Youri Tielemans, Ayoze Perez and James Maddison all got on the scoresheet as well, and ultimately it was another major statement from Leicester about their ability to break back into the top four in the Premier League this season.

As seen in the tweets below, they also made Premier League history with their huge win, as not only did it tie the biggest win in the league’s history after Manchester United’s 9-0 win over Ipswich back in 1995, but it was also the biggest away win in the top flight ever.

In turn, it was a memorable night for more reasons than one for the visitors, but as for Southampton, it was a nightmare Friday night outing as they will have some very difficult questions to answer in the coming days after a complete capitulation.

Nevertheless, it’s difficult not to be hugely impressed with what Brendan Rodgers and his players are doing so far this season, as they temporarily moved up to second place.

With the belief and confidence that such a result brings, they will surely hope to build on this and continue to show that they could in fact be a genuine threat to the top boys this season as they are showing consistency and real quality to separate themselves from those below them.

WHAT A NIGHT FOR THE FOXES.