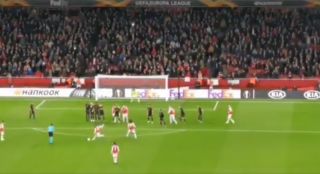 Nicolas Pepe scored an absolute blinder of a free-kick for Arsenal against Vitoria yesterday, as he helped the Gunners secure a last-minute turn around in the Europa League.

Having already scored from a set-piece earlier in the game, Pepe stepped up to another free-kick in added time, curling the ball straight into the top corner to hand his side all three points.

This is just beautiful. ? pic.twitter.com/EKzbqRRyTf

And now, another angle has emerged that shows just how good of a free-kick Pepe’s winner actually was.

As seen in the video above, footage from a fan shows the brilliant amount of curve and dip Pepe managed to get on his shot in order to find the back of the net.

Poetry in motion, that!