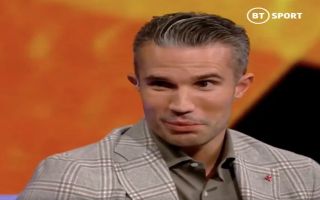 The 18-year-old, who moved to Emirates Stadium from South American club Ituano over the summer, registered his fifth goal of the season for the Gunners in a 3-2 home win against Vitoria Guimares.

Unai Emery has only used Martinelli sparingly at the start of the 2019-20 campaign, but his performances in Europe have caught the eye, with some fans and experts now tipping him for a bright future at the Emirates.

How much has this guy impressed so far? ? pic.twitter.com/JpI9OE4koi

Van Persie, who played for the club between 2004 and 2012, singled the Arsenal starlet out for praise after the win over Vitoria, insisting the Brazilian will get “even better with time”.

Check out Van Persie’s comments on BT Sport below.

RvP with great praise for Martinelli. So much potential! Another gem found by our scouting system ?? (@btsportfootball) pic.twitter.com/5YFrwkLJZs