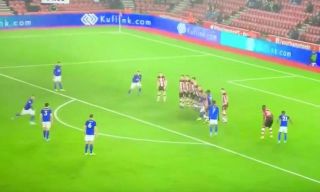 Leicester City were in a ruthless mood on Friday night as they secured a 9-0 win over Southampton at St Mary’s in a brutally one-sided encounter.

Ryan Bertrand’s sending off didn’t help the hosts as they were down to 10 men early on in the clash, and it was all downhill from there.

Goals from Ayoze Perez, Jamie Vardy and Youri Tielemans put them in full control of the game, and it was Maddison who added a touch of class with arguably the pick of the goals.

As seen in the video below, the creative ace whipped in a wonderful free-kick to give the hapless Saints goalkeeper no chance of keeping it out as the Foxes showed no mercy and continued to attack even after their eighth goal of the night with Vardy adding another in injury time.

Brendan Rodgers will have been delighted with what he saw from his side as they continue to show the quality, confidence and all-round game to establish themselves as genuine contenders for a top-four finish in the Premier League this season.

In complete contrast, Ralph Hasenhuttl now surely faces some very difficult questions about his future at Southampton especially with his side down in 18th place in the table and now coming off the back of a disastrous one-sided demolition job from Leicester.

The Foxes move up to second place temporarily with the win, just five points adrift of leaders Liverpool, albeit they’ve played an additional game compared to the Reds.

Maddison with a stunning freekick that breaks Premier League record for the biggest away win. pic.twitter.com/qWwIExDjSn

James Maddison has scored and If the result holds, @LCFC have set the record the biggest away victory in Premier League history. pic.twitter.com/g0adazZ27S