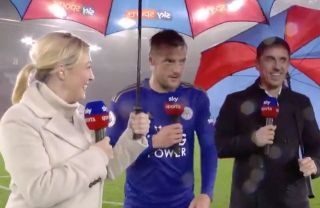 Leicester City were in ruthless form on Friday night at Southampton, as they eventually went on to break a Premier League record.

The Foxes secured a 9-0 win over the Saints, and in turn secured the biggest away win in Premier League history, while equalling the biggest ever win which was previously set by Manchester United against Ipswich in 1995.

Having started at a relentless pace by going 3-0 up in less than 20 minutes, coupled with Ryan Bertrand getting sent off, Leicester showed no sign of letting up after the half-time break and continued to go in search of more goals.

They were 7-0 up before the hour mark, but it was after their sixth that Vardy revealed that Jonny Evans let them know that they could be on to break the record.

As seen in his post-match interview with Sky Sports below, Vardy was delighted with the win and the performance, but it was a rather odd way to be made aware of the fact that they were in with a shout of making Premier League history with Evans on hand to get the message across.

Fortunately for Leicester, they managed to get that ninth goal in injury time from the penalty spot, and in the process they wrote their names into the history books on what was a sensational night for them as they were rampant on their way to moving up to second place in the Premier League table.

Jamie Vardy reacts to his hat-trick as Leicester beat Southampton 9-0 at St Mary's – a record Premier League away win. pic.twitter.com/RTY8bBnZvc 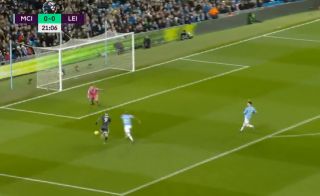