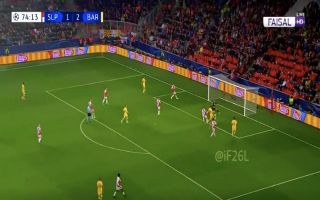 Lionel Messi spurned a glorious chance to score his second goal for Barcelona against Slavia Prague in the Champions League on Tuesday night.

The five-time Ballon d’Or winner opened the scoring in the Group F clash at Sinobo Stadium, finishing off a crisp passing move in the third minute.

Ernesto Valverde’s side failed to build on their early advantage though, and Slavia equalised shortly after half-time through Jan Boril, much to the dismay of the visiting Blaugrana supporters.

A Peter Olayinka own goal saw Barca move back in front in the 57th minute and the Spanish champions held on a for a 2-1 victory despite a nervy last 20 minutes in Prague.

GAME OVER! Barça chalk up the W in Prague! pic.twitter.com/h7WwAbW6hb

Messi could have made sure of the victory late on, but he failed to convert an excellent Jordi Alba cross with the goal at his mercy.

Check out Messi’s shocking miss from three yard’s out below, via Twitter.