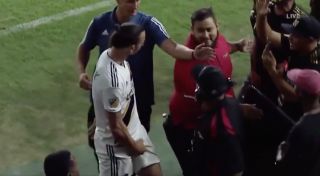 Zlatan Ibrahimovic seemed to go out with a bang for LA Galaxy last night, as his side suffered a 5-3 defeat to local rivals LAFC in the MLS Cup semi finals.

As per the Sun, Ibrahimovic only has two months to go on his deal with the US outfit, with the Swede’s future looking very much up in the air at this point.

Given this, the forward could very well have played his last match for the Galaxy last night, and it seems like Ibra wanted to do something fans will remember him by.

Zlatan’s a savage for this pic.twitter.com/M1A7jxRHZO

As he was walking off the pitch, the former Man United man grabbed his private parts whilst seemingly talking to some LAFC fans.

He just can’t stay out of the spotlight, can he….