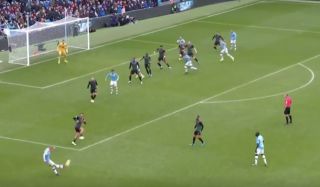 De Bruyne got his name on the scoresheet for Man City this afternoon, as he scored directly from a cross to hand his side a 2-0 lead against Aston Villa.

With the scoreline at 1-0, City finally made one of their chances pay, as De Bruyne scored a fluke goal.

Man City are made to wait for it, but after consulting VAR the goal stands. pic.twitter.com/NoNFfvDCIS

After playing a corner short, De Bruyne received the ball back, crossing the ball into the box, with his pass finding it’s way passed everyone and into the back of the net.

City in cruise control at the Etihad!