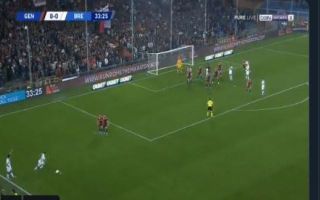 There have been so many reports recently to suggest that Sandro Tonali isn’t actually the same type of player as Andrea Pirlo. Yes he’s got the same hair and started at Brescia, but his style is really more like Rino Gattuso.

While that might be true, if the keeps scoring free kicks like this then the Pirlo comparisons will only continue to grow.

It’s a crazy angle to even try and shoot from, the only way to beat the keeper from out near the touchline is by producing absolute perfection – and that’s exactly what he’s done:

18-year old Sandro Tonali has just scored one of the goals of the season for Brescia. ??pic.twitter.com/bM22ik2dbg

You can tell he absolutely means it. The way he hits the ball and the shape on it shows it’s absolutely not an attempted cross.

Last month The Sun reported he has been linked with a big move to Man United and it’s a signing that would make a ton of sense. He’s clearly talented and fits the profile of the type of player they are buying recently, this might add a wee bit more to that price tag.