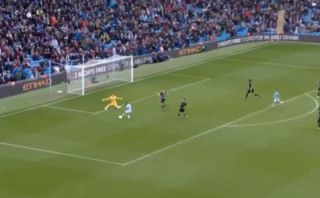 Raheem Sterling continued his fine form for Man City this afternoon, as the England international bagged a well-taken goal to open the scoring against Aston Villa.

with the scores tied at 0-0 going into the second half, Sterling took it upon himself to break the deadlock for the home side following a long ball from Ederson.

1??9?? seconds after the restart, Sterling strikes!

Great composure as he fires through Heaton's legs to break the deadlock. pic.twitter.com/sQJTHORLIQ

The Brazilian’s long punt up-field found Jesus, whose header was picked up by Sterling who then raced through on goal, finishing confidently with his left.