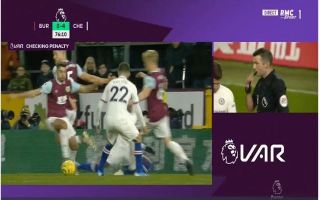 It’s a pretty good indication that VAR has been a disaster when it’s almost November and there almost seems to be some astonishment that the review system has managed to overturn a decision and get it correct.

It’s been a non stop horror show for VAR since it’s introduction to the Premier League, but even it could see that Callum Hudson-Odoi has committed an awful dive here:

Pretty sure there was a hand in Hudson-odoi’s back, everyone including commentators too busy seeing if there was contact on legs ????? pic.twitter.com/lCdNbuc9No

Everything has been pretty much perfect for Frank Lampard and his young team tonight, but these fans took to Twitter to criticise the young forward for his play acting:

Hudson-Odoi getting booked for diving

Hudson odoi goes over with both feet of the ground despite no contact, VAR correctly rules a dive. Sky commentators – ‘oh not sure he dived and deserved a booking’. Stop being fannys, totally deserved it!

About time someone grew a pair and overturned a penalty decision, blatant dive that from Hudson-Odoi

In the grand scheme of things the decision has made absolutely zero impact on the outcome of the match. Let’s see if the officials are brave enough to make a similar decision when there is a result on the line..

“Lost 90% of the fanbase” – These Chelsea fans are livid with Frank Lampard as talented youngster looks set to leave October 2, 2020 19:54
Chelsea FC