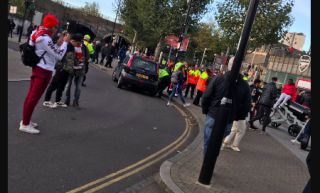 Several witnesses are claiming a car tried to plough into a crowd of people outside the Emirates Stadium ahead of today’s game between Arsenal and Crystal Palace.

The Gunners are in action shortly but police are now on the scene searching the vehicle, while the club shop the Armoury has been taped off by officers.

Not much more is known at this time, but the Daily Express have picked up the incident and state that there have been no reported casualties at this moment in time.

car now moved and is being searched by security as we speak – no injuries. pic.twitter.com/M8zf1fyeAD

This is certainly a disturbing incident to take place ahead of what should be a fun and relaxing afternoon at the football between families and friends.

It does at least seem, however, that the incident could have been a great deal worse and there’s no suggestion at the moment that the game should not be able to go ahead.

UPDATE: The Express report that Islington police have confirmed this incident was down to bad driving rather than anything malicious, and was not a terrorist attempt.

The car is said to have slowed down once it approached people near the Emirates.