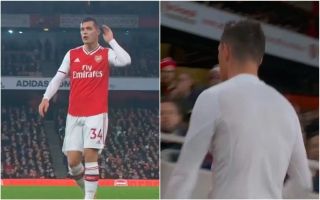 Arsenal captain Granit Xhaka has risked permanent damage to his relationship with the club’s fans and possibly his whole Gunners career after an extraordinary incident in today’s game against Crystal Palace.

With the score at 2-2 and with Arsenal having lost a 2-0 lead, Xhaka was subbed off by manager Unai Emery and reacted in the worst way possible.

Watch the video below as the crowd cheer the Switzerland international’s removal from the game, only for him to hit back angrily at their reaction…

As you can see in the clip, Xhaka first appears to tell the fans to ‘f**k off’ before cupping his hand to his ear.

Xhaka then angrily walks off the pitch, snubbing the handshake of manager Unai Emery before storming off down the tunnel.

Granit Xhaka, telling Arsenal fans to F*ck off, took his shirt off and walked down the tunnel. pic.twitter.com/pt6af0FUsG

Huge cheers as Xhaka is subbed. He's walking off rather than running, crowd are fuming and he then signals angrily to them. Wow.

Big cheers when Xhaka is taken off. Waves his arms at the crowd, tells the crowd to ‘FUCK OFF’, then storms off down the tunnel.

After being subbed off by the boss who appointed him Arsenal captain Xhaka throws the armband while walking off slowly before waving his hands in the air after being urged to leave the field quickly. He then ignores Emery's handshake and rips his shirt off. Unacceptable behaviour pic.twitter.com/P4uaXirQHi

It’s very hard to see how the 27-year-old can come back from this, as he’d already been an unpopular player and admittedly a surprise choice for club captain.

It will certainly be interesting to see what Xhaka, Emery and others involved at AFC have to say about this after the game…