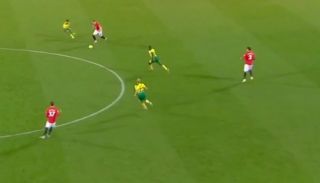 Manchester United did not exactly cover themselves in glory here as they allowed Norwich City a late consolation goal.

Watch below as Onel Hernandez pulls one back to make it 3-1 after being gifted the chance by Scott McTominay and Harry Maguire in particular.

First, McTominay loses the ball cheaply in midfield, and Hernandez then runs at United’s goal untroubled, with Maguire very weak in attempting to block his route to goal.

Hernandez then finishes well, denying Man Utd a clean sheet in what had otherwise been a pretty convincing performance at Carrow Road.