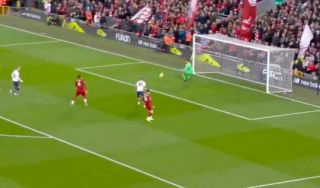 Harry Kane has opened the scoring inside the first minute of the game between Liverpool and Tottenham this afternoon.

Watch the goal video below as Kane pounces from inside the box as Son Heung-min’s initial shot comes back off the bar after an early Spurs attack.

In truth, Virgil van Dijk didn’t cover himself in glory here, with the Dutch centre-back doing well to initially follow Kane into the box before completely falling asleep and letting him get away from him.

Kane is lethal in those areas and punished Van Dijk for allowing him that extra second to get ahead of him and head it into the back of the net for a surprise start to today’s big game.