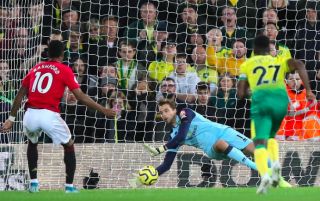 Manchester United manager Ole Gunnar Solskjaer has given his explanation for Marcus Rashford and Anthony Martial both missing penalties in the game against Norwich City.

Although the Red Devils ran out 3-1 winners at Carrow Road on Sunday afternoon, they could have scored even more if not for Rashford and Martial both seeing their penalties saved by Norwich goalkeeper Tim Krul.

The Dutch shot-stopper had a fine game for the Canaries, but Solskjaer believes both of those penalties should have been retaken.

Speaking after the game, as quoted by the Manchester Evening News, the Norwegian tactician was not happy that the referees all missed Krul being off his line for both penalties.

“I thought the reaction to his miss was excellent,” Solskjaer said of Rashford. “Ran back, chased, won the ball back, scored a great goal,but both penalties should have been retaken.

It’s like the six-second rule with the goalkeeper in his hands, that was used for a couple of months and it’s out of the window, and this as well on penalties, he’s a yard off his line, we looked at it the first month and now it’s gone.

“It’s so simple and so easy [to check the ‘keeper’s positioning]. But he’s seen it there as well, we can see it live he is off his line.

“He’s actually one of the best in the world, Tim Krul, on penalties. Remember the World Cup in 2014? Was it [Louis] Van Gaal who took [Jasper] Cillessen off? He’s clever in his mannerism as well, should’ve been booked probably, because he stayed away from the goal, but should have both been retaken.”

Man Utd fans won’t be too bothered on this occasion as it didn’t cost their team the three points, but this does seem like an important issue to stamp down on.

Some big moments this season could be decided on silly errors like this from match officials, and Solskjaer is quite right to call on them to do better.