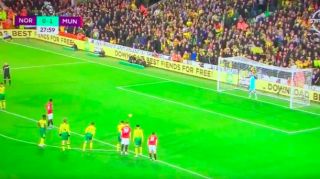 Marcus Rashford is not having the best season from – especially from the penalty spot.

Watch the video clip below as the Manchester United striker once again fails to put away a spot-kick, having also done so in a defeat to Crystal Palace earlier in the season.

Luckily for Rashford, he made up for it not long afterwards with a goal from open play to make it 2-0 for the Red Devils against Norwich City.

Still, how long before Ole Gunnar Solskjaer takes the England international off penalty duty after this latest failed effort?

BBC bosses ready for backlash as Rashford set to be snubbed for Sports Personality of the Year October 26, 2020 23:32
Manchester United FC