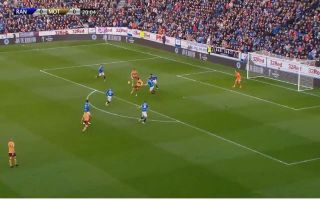 It pretty much sums up the tenure of Steven Gerrard at Rangers – just when his team start to build up momentum and get some impressive results they take an almighty step backwards.

They went top of the league before immediately slipping up against Hearts, while Motherwell find themselves in front at Ibrox in a game Rangers were expected to win.

Gerrard’s men had to win heavily to take Celtic’s place at the top of the league, but they are currently hoping to find a way to simply win the match.

READ MORE: Recent Manager of the Month winner tipped to take over from Klopp by former Liverpool teammates

This goal from Devante Cole – son of former Man United striker Andy- was a cracking finish and silenced Ibrox. The Rangers TV commentary only adds to the goal:

It would be brave to bet against Rangers coming from behind to get the win, Motherwell often collapse at Ibrox but this goal certainly surprised a lot of people.