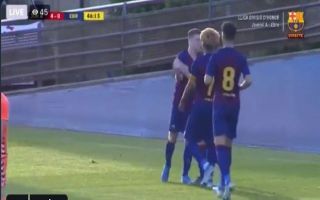 We’ve seen the success that Jadon Sancho has had in Germany and how it could inspire more British players to move abroad. It seems we might have to get used to them moving at a much younger age.

Louie Barry was mightily impressive for West Brom at youth level, so good that Barcelona decided to take a punt and sign him.

The twitter page for La Masia has just announced he scored his first goal for the club today, playing at the “Juvenil A” level:

Goooooooaaaaaallllll @LouieBarry6!!! His first for Barça! And look how much it meant to him. Good lad ?? pic.twitter.com/W6J5j7DGlh

It seems the next obvious step up from here would be to play for the B team who play in the Spanish third tier. He’s only 16 so it’s tough to see him breaking into the first team any time soon, but Ansu Fati has shown if you’re good enough then you will get a chance.