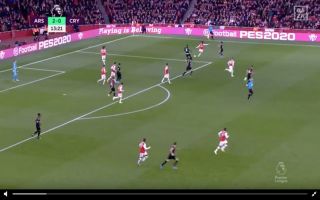 Mateo Guendouzi showed off his unbelievable passing range with a stunning long-ball into Pierre-Emerick Aubameyang, should the forward have put this away.

Arsenal had a glorious opportunity to put today’s clash against Crystal Palace to bed in the 13th minute of the tie.

The Gunners were winning 2-0 at this point and Mateo Guendouzi played an amazing pass from near the corner flag into Pierre-Emerick Aubameyang’s path.

Joel Ward – who isn’t known for his pace – somehow managed to catch up with the superstar and his eventual effort on goal ran wide.

Take a look at the starlet’s pinpoint pass below:

Guendouzi’s passing ability is sensational. Should Aubameyang have done better with this chance?