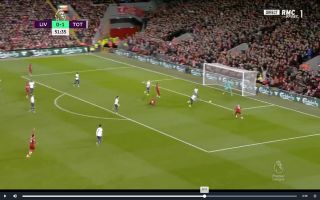 Jordan Henderson has equalised for Liverpool against Spurs this afternoon, the England international produced a fine finish after an extraordinary pass from Fabinho.

In the 51st minute of this afternoon’s mammoth Premier League clash between Liverpool and Tottenham, Fabinho split Spurs’ defence with a lovely pass over the top of the defence.

Danny Rose left Henderson in too much space and the midfielder slashed the ball into the back of the net with a fine half-volley.

Check out the Reds’ equaliser below:

Henderson may have been sloppy in the first-half, but he’s come up with a crucial goal to get the Reds back into it.