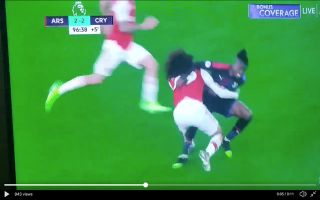 Arsenal ace Matteo Guendouzi made a crucial last-minute foul that prevented Palace star Wilfried Zaha from hitting the Gunners on the break.

In the final moments of today’s 2-2 draw between Arsenal and Crystal Palace, Matteo Guendouzi got himself a yellow card for recklessly rugby tackling Wilfried Zaha.

The youngster threw himself into the tricky winger, being booked as a result of his antics.

The buzz around the Rugby World Cup has simply ensured that Arsenal avoided defeat today.

Take a look at the Frenchman’s clutch stop below:

Remarkable tackle from Guendouzi on Zaha in the closing seconds of the Rugby World Cup pic.twitter.com/lIPOh9tmwQ

Even though Guendouzi’s challenge was illegal, he’s certainly earned plaudits from fans for his crucial decision.