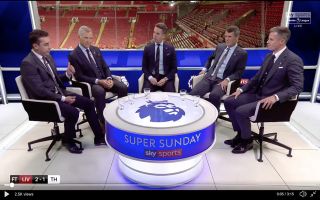 Sky Sports’ panel of Premier League legends had some harsh words for Tottenham star Dele Alli, the England international’s form has been poor over the last year.

Gary Neville added that the attacking midfielder ‘needed to hear harsh criticism’ if he’s to have any hope of getting back to his best after a run of unflattering performances over the past year.

Liverpool legend Graeme Souness believed that Tottenham’s lack of ‘senior pros’ in the dressing room was contributing to the ace’s poor displays.

Take a look at what the Premier League legends had to say on Dele:

"He basically thought he was a player, thought he'd achieved something, but today, non-existent."

Dele has struggled with injuries over the last 18 months which can excuse some of his displays, but he’s been back in the fold for a while now so you’d expect his performances to be better.

Souness reiterated that he’d hoped Alli would prove himself as a ‘Frank Lampard type of player’ after being hugely successful when he first joined Spurs.

The star’s fall from grace recently is alarming. We hope that the 23-year-old can get back to his best soon as he has the potential to be a crucial player for England over the next decade.