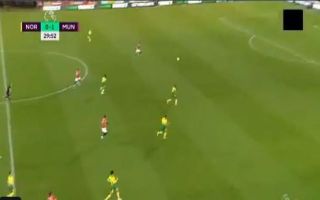 It certainly looks like the drama surrounding Man United and possible penalty takers will continue after this game. It looked like Rashford was the obvious choice but that’s a couple of misses this season.

It would be easy to expect him to lose focus and struggle for the rest of the game. He certainly looks like that didn’t affect him at all after he showed brilliant composure to bring this ball in and tuck it away under the keeper:

The Goal of Marcus Rashford for Manchester United in video ! ?#NORMUN #MUFC ? pic.twitter.com/FsKAvPa9A9

Usually United really struggle for goals so it’s rare to see them go 2-0 up in the first half. Norwich are struggling so you have to feel if Solskjaer’s men can get one more then it’s game over.