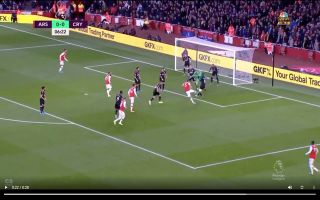 Arsenal defender Sokratis has handed the Gunners an early lead against Crystal Palace this afternoon, the centre-back produced a lovely finish after a corner.

In the 7th minute of this afternoon’s Premier League clash between Arsenal and Crystal Palace, the Gunners took the lead after Nicolas Pepe whipped a corner into the box.

The initial corner was cleared and the ball dropped for Sokratis and the former Borussia Dortmund star fired a lovely half-volley into the back of the net.

Take a look at Arsenal’s opener below:

Fans won’t have expected the veteran defender to give them the lead.