It was once a battle between two of Italy’s top teams, now both Roma and AC Milan find themselves outside of the top four in Serie A. They meet on this afternoon in Rome in a bid to kick start their season as we show you to how watch the game. 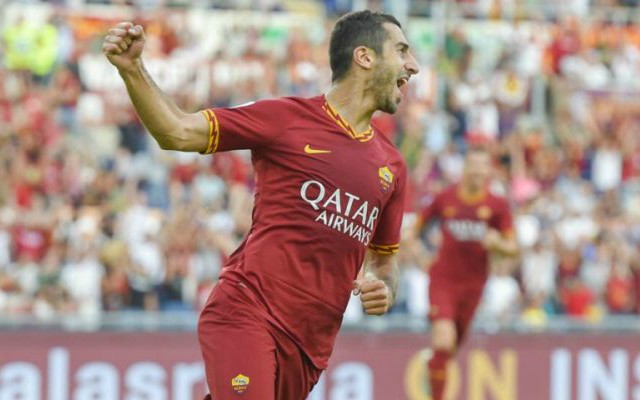 Mkhitaryan in action for Roma

Where is Roma v AC Milan being played?

What are your predictions? AC Milan or Roma?

Both sides have just three wins from their eight league games. But it’s Roma who just have the edge heading into this encounter. They sit three points ahead of their visitors on Sunday.

However, both Roma and Milan go into the game on the back of disappointing draws. Milan conceded a 92nd minute equaliser as they drew 2-2 at home to struggling Lecce.

And Roma will perhaps be even more disappointed. They were held to a goalless draw at bottom of the table Sampdoria, and had young forward Justin Kluivert sent off late on.

Punters have given the home side 6/5 odds to come out on top.

The away side are currently 12/5 to take all three points. A draw is also currently available at 12/5.

Both Aleksandar Kolarov and Krzysztof Piatek have three league goals to their name this season.

The left-back is available at 9/2 to make it four for the campaign, while the Polish striker can be backed at 7/5 to add to his tally.

Piatek is 5/1 to score the game’s opening goal.

It is, however, Roma’s Edin Dzeko who looks most likely to find the back of the net. The Bosnian has four for the campaign, and is 4/1 to score the first of the game.

Roma have perhaps found the task of managing Europa League and domestic football difficult this season.

They are undoubtedly a much stronger team than their league form suggests, although the same could be said of their opponents this afternoon.

Both have dropped points from winning positions, and both have found clean sheets relatively hard to come by.

Roma are available at 8/1 to win from behind. Milan are 10/1 to achieve the same feat.

The hosts are currently 12/5 to keep back-to-back Serie A clean sheets for the first time this season. And their visitors are priced at 7/2 to keep their first clean sheet in over a month.

In a hugely competitive Serie A campaign, the season provided the likes of Roma and Milan to finally knock champions Juventus off their perch. But given their respective starts to the current season, it certainly doesn’t look like there will be an upset in Italy anytime soon.

Live Stream Terms & Conditions
To use the Live Streaming service you will need to be logged in and have a funded account or to have placed a bet in the last 24 hours.

Any fixture/event on our website which has the Play or Video icon next to it is scheduled to be shown via Live Streaming.