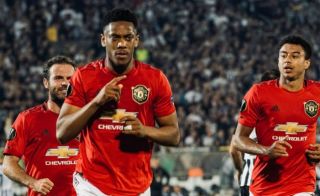 The 23-year-old made his first Premier League start since August and produced a fine performance against the Canaries. He was a constant attacking threat and scored Manchester United’s third goal of the match in an eventual 3-1 victory for the Red Devils, their first away win since March. Martial could’ve had another goal to his name but Norwich keeper Tim Krul saved his penalty.

SEE MORE: ‘He might save Ole’s job’ – Pundit highlights one Man United man who could have say in whether Solskjaer is sacked

Following the match, Solskjaer heaped praise on the Frenchman, saying that he is a vital player for Manchester United. The 46-year-old told the club’s official website: “It was a great finish by Anthony. He’s vital for us. He’s a top striker and to have him back; fit, smiling and enjoying his football, of course, is a big thing for us. He’s clever in his movement and he’s not been given credit for his defending, clever defending. We feel Anthony is an important player for us and we felt the effects of him not being there. We’re pleased to have him back and scoring goals.”

With his goal yesterday, Martial now has four goals and an assist in six appearances for Manchester United this season so far. Manchester United fans will surely be delighted to see the 23-year-old back to full fitness.

With their win, the Red Devils moved to seventh in the Premier League table. Solskjaer’s side next face Chelsea in the Carabao Cup before taking on Bournemouth at Dean Court.